Honeybees (apis mellifera) have been existing for about 30 Mio years. Some evidence for this can bee found in amber with enclosed bee-bodies.

Mankind has been attracted to these animals for their products and has been hunting them for many thousands of years. Honey with its unique properties - the first sweetener known to man, and being a food that is neither plant nor animal – was worthwhile being harvested.

A wide variety of bee species exist. The dark or black honeybee (apis mellifera mellifera) is endemic to the North of Europe, like the British Island, Belgium, Holland, Germany and Scandinavia, the Baltic States and the Ukraine.

is an extremely well organized and adapted organism. Mysteriously, everybody knows what to do. A colony is a complex adaptive system, a dynamic network of acting and reacting individuals. Control is utterly decentralized.

In summer, when food is readily available, the colony consists of
one queen

In winter, the colony shrinks to the necessary minimum to let the queen survive the cold period. She is an egg laying machine, needs to be tended and fed by worker bees at any time and has a life span of up to 5 years. Worker bees live 6-8 weeks in summer, in winter up to 6 months.

When the queen lays eggs she decides what she will produce. A fertilized (inseminated) egg will result in a female bee, an unfertilized egg in the production of a drone.

Designed food will then determine the fate of the unborn bee. If fertilized eggs are being fed on pollen and nectar – the usual proceeding - worker bees are born.
If the nourishment is decided to be exclusively gelee royale, a substance produced by the worker bees themselves in a gland, a new bee queen will develop, who can then go ahead and raise a second, new colony.
These obviously amazing properties of gelee royale, led humans to understand that taken up as supplement will make them look fabulously royal and open the door to longevity, to say the least.

In the 19th century, the German beekeeper Johannes Mehring thoroughly observed his animals, and came up with the concept of looking at a colony of bees as one organism, one animal consisting of many bodies. In this organism, the queen is the female reproductive organ, the drones represent the male reproductive organ and the worker bees take the role of all the other organs and functions of a body.

Lately, this idea is being picked up again by the honey bee researcher Jürgen Tautz.

The bee's produce is honey. It can be understood as essence of a region, a carrier of floral biodiversity by taste. A pot of city honey can be then experienced as concentrated reflection of the buffet of great plant variety offered to the bee in an urban context.
Honey is a bio-monitor, giving a direct translation of the bee's pasture and environment's ingredients. 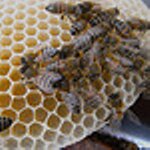 to put honey into perspective -
A honeybee weighs approx. 130 mg.
In order to fill her (honey) stomach, she has to visit 100 apple blossoms.
However, in order to produce ½ kilo of honey she has to visit 4.5 million flowers by flying 150.000km.
One bee can produce less than one quarter teaspoon of honey in her lifespan.

Since I have known this, a little prayer of respect escapes me always, in the presence of honey.....

By nature, bees are sedentary.
For pollination reasons beekeepers get paid by farmers to move with their hives to blossoming fields of crops. This practice gives “pure” honey - that is honey produced from mono-culture fields.

In the city, bee-food is more divers. Green areas like parks or back yards offer a variety of flowers to be visited. City honey is always a “mix”. The advantage of urban nectar is that the pesticide level is low - definitely lower than the nectar from conventionally grown crops for harvesting.e

An article on urban bees in Brussels from the Bulletin September 2010 issue, please download here.

Bees are very versatile architects. The complexity of honeybees' highly social behavior, the organization of their colonies, their “intelligence”, preciseness and functionality in constructing, breeding harvesting and preserving can be seen in a naturally built hive. The structures are impressive, almost unbelievable. 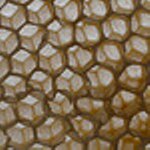 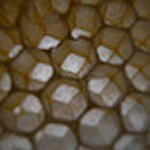 In the commonly used wooden boxes, called beehives or supers, space is designed such that the bees are constraint to build their wax structures exactly where the beekeeper wants them to. Comfortable for the beekeeper might be less convenient for the bees.
Naturally, the bees build one big construction of wax that is interconnected, can move (swing) and uses the naturally available space (a hollow tree, eg.) in the best possible way. A naturally grown beehive construction has a beauty that can never be compared to the straight, broken and forced shape of the frames in the super.

Letting bees design their own shapes results shows the ingenuity of the construction even more.